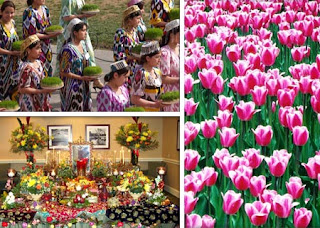 Folgender (engl.) Artikel widmet sich dem Nowruz (Neujahrs) Fest im persischen Einflussgebiet. Wünsche dann ebenso ein fröhliches und friedliches neues Jahr!
By Kourosh Ziabari:
Nowruz is the ceremony of peace, brotherhood and faith.
History books say that Iranians have been celebrating and glorifying it for more than 6,300 years. I’m talking about Nowrouz; the Persian New Year festival. In 2010, the UN General Assembly recognized Nowruz as an international holiday..........................
.....and called on the member states to do their best to enshrine and preserve this invaluable cultural heritage.

Nowruz is a set of festivities which mark the commencement of new solar year. Every year, on the exact moment when the sun crosses the celestial equator and the astronomical vernal equinox starts, Iranians gather together and celebrate Nowruz, literally meaning the “New Day.”

Aside from the details of how it is observed, Nowruz is actually a strong and unbreakable chain that connects several countries with diverse cultures, languages and religions in different parts of the world which all once constituted the civilization of Greater Persia. All the Iranians in four corners of this great land, the Persian-speaking minorities in the U.S., Canada and Europe, the people of Tajikistan, Afghanistan, groups of people in Turkmenistan, Azerbaijan, Turkey, Uzbekistan, Kyrgyzstan, Kazakhstan, Kosovo, Armenia, Albania and Iraq celebrate Nowruz annually and consider it as one of their main national festivals.

The chained festivities which constitute the complex of Nowruz begin with Chaharshanbe Suri or the Wednesday Feast. Since 1700 BC, the Zoroastrians of Iran believed in the myth that Wednesday is an ominous day, so in order to wipe out and eliminate the gloominess and darkness of Wednesday, they would light bonfires on the night of the last Tuesday of the year and jump over it, repeating the words “my sickly yellow paleness is yours, your fiery red color is mine.” This phrase meant that the fire should take your pains, sickness, boredom and problems and in turn give you energy, warmth, joviality and blessing. In the ancient belief of the Zoroastrians, fire was a symbol of purity and wholesomeness and that’s why the Wednesday Feast was also known as the Festival of Fire.

One of the interesting customs of Chaharshanbe Suri which is unfortunately obsolete and outdated now was Falgush (overhearing). Iranians believed that certain days of the year were suitable for divination. Therefore, the younger members of the family or the girls which were looking for marriage would go out at night, stand in the corner of streets and alleys and listen to the conversation of the passers by and interpret them according to their wishes and desires. Thereafter, they would return home and retell what they had heard from the passers by and the whole family would decide on a common interpretation. This action was called Falgush or eavesdropping.
Warm family gathering is another impo
rtant ingredient of the Iranian Chaharshanbe Suri which has surprisingly survived the passage of time. After jumping over fire, overhearing and observing the rest of Chaharshanbe Suri’s ceremonies, all the family members would gather in a room heated by firewood and listen to the old parables and allegories retold by the grandfathers and grandmothers. Certain sweetmeat and dried fruits would also be served and vegetables should also be eaten along with the other comestibles. Iranians believe that vegetables are symbols of fertility and good luck and it’s auspicious to consume them on the night of the Wednesday Feast.

After the Wednesday Feast is celebrated, the Iranians would take care of Khuneh Tekuni or Spring Cleaning. In the final days of the year and in the rural regions of the northern province of Guilan, people would refurbish the indoor and outdoor walls of their houses and paint them entirely. They would also wash the carpets and then put them before the sunlight to be dried. Changing some of the unusable home appliances is another stage of Spring Cleaning. Khuneh Tekuni literally means “shaking the home” and it was named this way because Iranians practically would turn upside down the whole home to clean everything and make sure that nothing, from the doors, windows and walls to tables, floor and ceiling would be tainted.

An important character which has historically been associated with Nowrouz and its festivities is Amoo Nowrouz. Amoo Nowrouz is the Iranian counterpart of Santa Claus, but the historians believe that they were the Europeans who adopted Santa Claus from the Iranian Amoo Nowrouz. Amoo Nowrouz is a mythological character, married to Grandma Frost. He appears on the final days of the year and the first days of Nowrouz and brings children gifts and spreads the news of the arrival of spring. He is a wise, prudent old man who passes the old story of Nowrouz to the youngsters. Grandma Frost who loves Amoo Nowrouz very much, asks the woodpeckers and tit birds to weave a beautiful and prestigious cloak for her spouse, because he has been traveling the whole year and is tired very much.

The climax of the beauty and exquisiteness of Nowrouz emerges when the family members set the Haft-Seen tablecloth and huddle around it during the last moments of the old year to welcome the moment of “Tahvil-e-Saal” or Transition of Year. This moment is calculated according to the Jalali Calendar which the prominent Iranian polymath Omar Khayyam proposed almost 800 years ago. Jalali Calendar, according to geo-physics and astronomy experts is the most accurate and precise solar calendar which has been put forward up to now.
Haft Seen table is the manifestation of the glory, magnificence and splendor of Iranian culture. Haft Seen table is adorned with different elements and components, including seven blessed materials whose name start with the Persian letter “seen” sounding “s.” That’s why the table has been named Haft (seven) Seen. Red apple is an important part of Haft Seen table. In Persian culture, red apple is the symbol of health and well-being. Colored eggs are also put on the table. Egg in Persian culture signifies fertility and fecundity. Other components are dried oleaster fruit which symbolizes love and compassion, sweet pudding made from wheat germ which represents affluence and prosperity, vinegar which symbolizes old age and patience, sumac fruit which characterizes sunrise and heralds birth, coins which denote wealth and richness and fragrant hyacinth flower which is indicative of the arrival of spring. However, a spotless and perfect Haft Seen table should definitely include two or three gold fish in a crystal bowl, a large mirror which reflects everything laid on the Haft Seen table, a Holy Quran and the book of poems of legendary Iranian poet Hafiz and two candles.

Iranians also put home-made, traditional puddings, tartlets and pastries such as “Baqlava” on the table and once the moment of vernal equinox arrives and the TV channels air the special song of New Year, the family members shake hands, hug each other and eat from the edibles on the Haft Seen table as a sign of thanking the Almighty God for what he has endows to us.
On the first day of Nowrouz, all the family members go to pay visit to the grandparents and send their greetings to them. They present gifts to the elderly and in return receive certain amounts of money as the New Year gift, called “Eidee.”

Iranians send emails, mobile messages and letters to their far relatives and friends on the eve of New Year and receive several guests during the 14 days of the New Year holiday. All of these activities are done to be in line with a single objective: bringing the hearts closer together and promoting friendship and brotherhood among the community members.

In Nowrouz, Iranians living inside the country or those who are abroad would all try to realize a common goal: disseminating Iranians’ message of peace for the world citizens and introducing the true face of Iran’s culture and civilization to the people around the globe. Nowrouz is such a diverse and multifaceted ceremony that needs several books to be introduced to those who don’t know it properly. The Nowrouz songs and lyrics, the stories of Haji Firouz (the black-faced, dancing clown of Nowrouz), the shopping of New Year night, Ghashogh-zani (Spoon-hitting) ceremony, the special rites of the moment of the Transition of Year for those who spend the last seconds of the old year and the first minutes of New Year beside the graves of their beloved relatives, specially those who were martyred during the 8-year war of Saddam Hussein against Iran and other customs and traditions of Nowrouz are the things which will unquestionably astound you if you study about them in details.

Kourosh Ziabari is an Iranian freelance journalist and media correspondent. His articles and interviews have appeared on a number of media outlets and news websites including Tehran Times, Press TV, Global Research and Foreign Policy Journal.
um 17:08 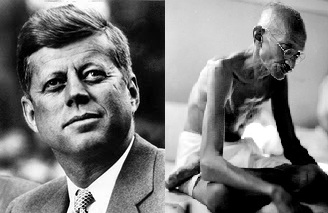 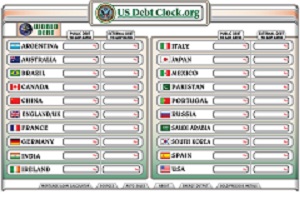 NOTICE!!!! These Videos or BLOG CONTENT may contain copyrighted (© ) material the use of which has not always been specifically authorized by the copyright owner. Such material is made available to advance understanding of ecological, political, human rights, economic, democracy, scientific, moral, ethical, and social justice issues, etc. It is believed that this constitutes a 'fair use' of any such copyrighted material as provided for in section 107 of the US Copyright Law. In accordance with Title 17 U.S.C. Section 107, this material is distributed without profit to those who have expressed a prior general interest in receiving similar information for research and educational purposes. For more information go to: http://www.law.cornell.edu/uscodeAlle Markennamen, Warenzeichen und eingetragenen Warenzeichen sind Eigentum Ihrer rechtmäßigen Eigentümer und dienen hier nur der Beschreibung bzw. der Identifikation der Geräte und -oder Gerätetypen. Irrtum und Darstellungsfehler vorbehalten